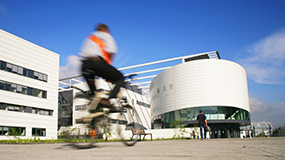 This part is based on two recent discoveries:

A manuscript by Jost Bürgi from 1584, discovered by Menso Folkerts in 2013, containing the oldest iteration method in several variables, for the computation of an impressive table of sine values.

An unpublished manuscript by Joseph Louis Lagrange from 1780, containing the first correct convergence proof of an iteration method (by Johann Bernoulli from 1742, which, in fact, turns out to be closely related to Bürgi's algorithm) discovered last year by Philippe Henry in the Bibliothèque de l'Institut de France.

We end by showing the first geometric understanding of the convergence of the one dimensional iteration $x_{n+1)=f(x_n)$ by Leonhard Euler (in a paper on iterated exponentials) and (probably) the first nice zigzag picture drawn by a scientist, who did most of his great work here in Grenoble.

This part focuses on iterative methods for linear equations:

These methods were invented for the same reasons as they are used today, namely to reduce computational cost. Gauss states in a letter to his friend Gerling in 1823: "you will in the future hardly eliminate directly, at least not when you have more than two unknowns".

Richardson's paper from 1910 was then very influential, and is a model of a modern numerical analysis paper: modeling, discretization, approximate solution of the discrete problem, and a real application.

The work of Stiefel, Hestenes and Lanczos in the early 1950 sparked the success story of Krylov methods, and these methods can also be understood in the context of extrapolation, pioneered by Bresinzki, a student of Gastinel from Grenoble.

This brings us to the modern iterative methods for solving partial differential equations, which come in two main classes: domain decomposition methods and multigrid methods. Domain decomposition methods go back to the alternating Schwarz method invented by Herman Amandus Schwarz in 1869 to close a gap in the proof of Riemann's famous Mapping Theorem. Multigrid goes back to the seminal work by Fedorenko in 1961, with main contributions by Brandt and Hackbusch in the Seventies.

Comments have been disabled for this video.

There is no note available for you for this video.